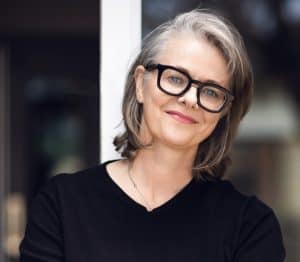 Renowned as a performance-pilot, not only does Miranda support stars at the highest level, but also guides emerging talents into stellar careers.

Miranda shifts paradigms, empowering actors to realize and activate their own talent. In her active masterclasses, specifically developed for Zoom, she introduces simple, fast, innovative approaches. 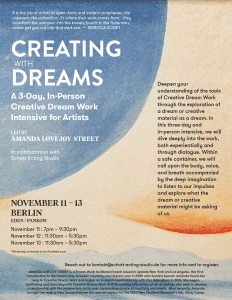 Deepen your understanding of the tools of Creative Dream Work through the exploration of a dream or a creative project as a dream. This is a three day in person intensive limited to participants who can wholeheartedly commit to the entire workshop. Dream work experience is not as necessary as a commitment and willingness to fully explore.

An Introduction to Creative Dream Work with Amanda Lovejoy Street 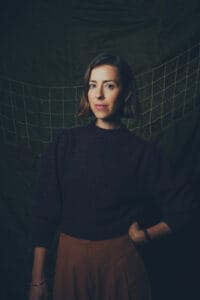 In this introduction, we will explore the tools of the work both experientially and through dialogue. We will begin by opening the body, voice and breath, experimenting with getting off the grid and into the non habitual. As we slow down and soften the central nervous system, we will seek to drop into a relaxed, meditative space where we will humbly make contact with the unconscious through inner symbols and figures and unearth what our artistry might crave and need at this time. 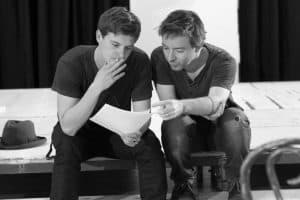 Join director, teacher and dramaturg Geordie Brookman for a three days acting intensive focussed on a combination of scene building and physicality.

We will provide participants with a carefully chosen contemporary short play (either a 2 or 3 hander) and, with Geordie’s guidance, will analyse, rehearse and present the works by the end of the intensive.

Story for Tellers with Tomer Adorian 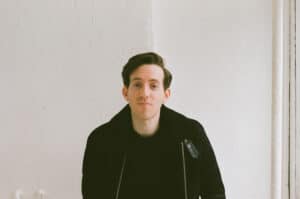 How to tell stories that matter

As actors, directors, and writers, we often describe our work as storytelling. Yet, have we ever stopped to think about what makes a story interesting? What is it that turns a series of facts or events into a narrative?

In this two-week intensive, we will explore the elements of story structure and the art of telling it to others. Each week, we will discover new methods and tools to unlock the hidden meanings behind monologues, scenes, and fiction. Tell stories, share work, and clarify our artistic voices in order to better our individual crafts.

We geared the course toward theatre-makers of all facets, looking to expand their knowledge and take ownership of their work.

Tomer Adorian is a New York based director and theatre-maker. 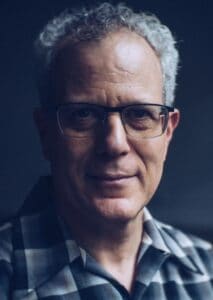 Join Terry for this two day Master Class Intensive online! The focus of Master Class is simple: How to make your scene work better. We will explore bold choices, rich relationships, authentic inner life and full use of your imaginations. All of this should support your work to be lively, rich and free. Be prepared to work and play hard. 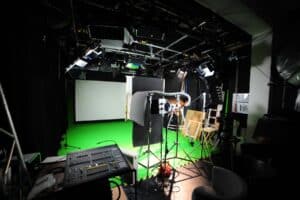 Actors will perform scenes on camera, and discussions will follow. Topics include script analysis, auditioning, and self-tapes. The workshop is designed for advanced professionals and taught in English. 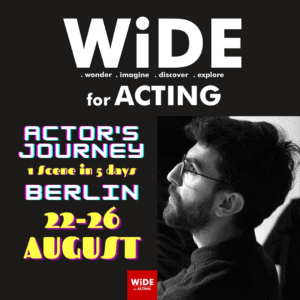 Every modern acting system/technique/approach/method focuses on getting to reality in a way. Some of them emphasize to opposite direction but their purpose is the same: to build a complete reality.

While Morris takes “I” in the center, Meisner puts “you” under the spotlights. Both of them try to reach reality, but they positioned differently their starting point. And this contrast presents us with a solution at the same time. 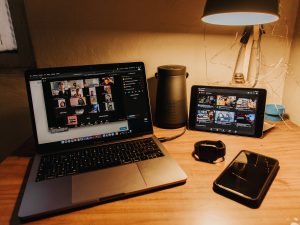 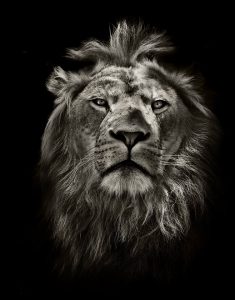 Animal work is a wonderful tool for creating a physical life different from our own and essential work in our quest to create a character. We base our work on animal movements and behaviour through detailed observation. We become the animal totally. From the humble rabbit and to the majestic eagle to the comical duck and proud lion. Once the animal has been established in our bones we understood it’s dynamics we slowly see how our investigations effect our bodies when we start to humanise the movements. 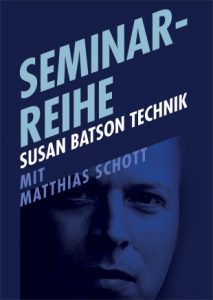 The training is suitable for actors with and without prior knowledge of the Susan Batson technique. The training teaches the actor to transform his own longings, fears, memories and sensations into the logical and focused energy of the character and his/her short monologue. 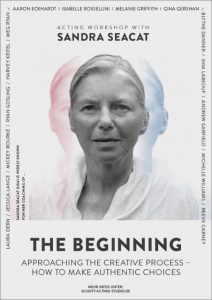 Sandra Seacat’s main concern when working with an actor is that the actor learn to fully express his or her own uniqueness and truth as a human being, and to break through the patterns and blockages that prevent the artist from living truthfully that part of themself that is the character fully on stage or in front of the camera. Ms. Seacat develops exercises that both reveal the actor to himself and the audience and also give the actor the courage to express who he is and to trust in himself and his talent. 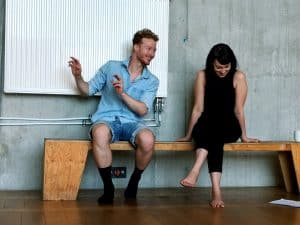 We create a basis for your further work as an actor. Stanislawski and various english and american developments of his methods of Uta Hagen, Stella Adler, Lee Strasberg offer you a framework to learn the most important aspects of the art of acting. Improvisations, exercises and scene work that will stimulate your imagination and ability to transform, in order to be able to act convincingly in front of the camera or on the stage + Improvisation and Exercises from British Drama Schools LAMDA, RADA, Guildhall and Drama Centre.

Masterclass On Characterisation with Mike Alfreds 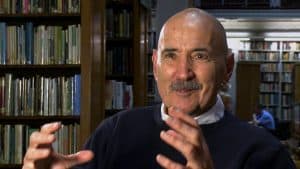 Mike Alfreds is giving an extended workshop on Characterisation using characters from Chekhov‘s Seagull. In it, he will explore techniques for developing character that range from deconstructing the text through the four lists to physical disciplines such as those created by Laban, Michael Chekhov, Stanislavski, et al.

He will also deal with the necessity to reach beyond one’s personal cultural framework to those of people who lived in a different place and time. So elements of style will be explored. The workshop will include processess for playing scenes, working on actions, objectives, units, beats and points of conecentration. 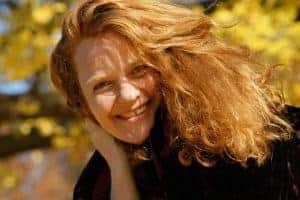 Recognized for her work in series such as ‘Sex and the City‘, ‘The Sopranos’ among many others; Sheila Gray will be in Berlin conducting an acting workshop.

This workshop will be a survey class of tools an actor can implement while rehearsing and performing with an emphasis on film technique. Since working in film is an intimate process with the camera picking up subtleties we will focus on how to develop privacy in a public setting and how to create a rich internal life and inner dialogue that the camera will then pick up. 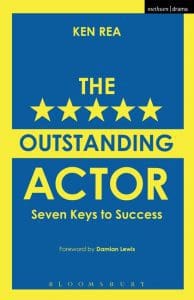 Ken Rea’s teaching focuses on how actors can unlock their creativity and presence to project their unique individuality. This intensive workshop draws on a variety of sources, including little known eastern techniques. It shows you how to achieve a more compelling presence, have greater ownership of the text and maintain a relaxed but vital energy, even in stressful situations such as castings, auditions and the pressures of filming. It also explores how you can attain specificity and greater detail in character choices. 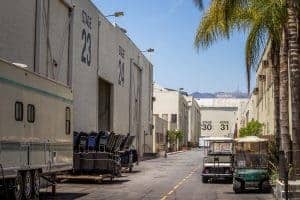 Allowing the talent to reach its full potential removing the obstacles that inhibit the expression of the individual unique Talent. ABOUT GRETA SEACAT: World renowned acting coach and teacher. Greta works with A list, Oscar and golden globe winning actors. HOW SHE WORKS: Sandra Seacat’s Technique Founded in the Method (Actor´s Studio) and with new approaches to the unconscious the seat of the creative impulse. Dream work and use of the archetypes. 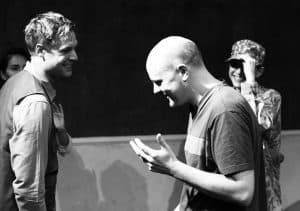 This work provides an accurate and complete way of describing human behaviour and its dramatic representation, giving an actor the tools to transform body and mind into the shape, form and thoughts of a new character. It provides a way to create nuanced and detailed characterisation, and to access inner sensations ripe for use in dramatic circumstances. Clear examples will be given of what physical actions prompt what psychological responses, how those two areas are linked and entwined, how character is formed through control of the body’s movement, how different psychological types are manifested physically. 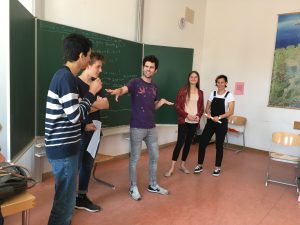 An English language workshop devoted to the words and stories of William Shakespeare.

This workshop is for you if: 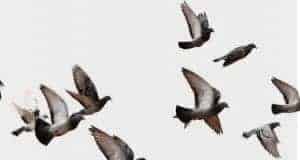 Are you interested in telling and writing stories? Do you love reading plays, going to the theatre, avidly watching TV series or are you fascinated by complex storytelling and multi-faceted characters? Are you in the process of writing your own one-act play or short film or perhaps do you simply want to learn more about the ins-and-outs of dramatic writing?