“Miranda’s skills as a coach place her at the top of her field. The work she does is unique anywhere in the world.” – Peter Jackson; Regisseur ‘The Lord of the Rings Trilogy’, ‘The Lovely Bones’ 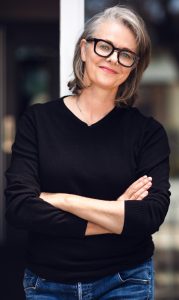 Renowned as a performance-pilot, not only does Miranda support stars at the highest level, but also guides emerging talents into stellar careers.

Her clients have won and been nominated for multiple Oscars, Golden Globes, Emmys, BAFTAs and AAFTAs, most recently a 2022

Golden Globe win and Best Actress nomination at the 2022 Academy Awards. She has lifted up countless careers. Her students call her a star-maker. Miranda shifts paradigms, empowering actors to realize and activate their own talent. In her active masterclasses, specifically developed for Zoom, she introduces simple, fast, innovative approaches.

ROLL-CALL: DIRECTORS and INSTITUTIONS
Directors Miranda has supported on-set include Oscar-nominated Jane Campion, Peter Jackson, Morten Tyldum and Garth Davis. She has guided countless emerging TV and film directors through her work at some of the world’s top film schools: NFTS in London, NYU/Tisch, AFTRS and as a 4-time creative leader or Governor at the TIFF performance and directing labs. A Film London Lodestar, Miranda is one of the world’s top teachers.

“Miranda is amazing. Working with her is always a new experience. She really helps me make each character truly unique. She is an inspiration and truly loves the art of film. I love the work I’ve gotten to do with Miranda!”– Isabelle Fuhrmann (‘The Hunger Games’, ‘The Orphan’)

Based on the principles of Stanislavski, Miranda’s work develops actors’ spirit and actors’ craft alongside each other. Other influences on her work include Verbatim practitioner Anna Deavere Smith and photographer Nan Goldin. Miranda draws teaching inspiration from a wide variety of sources including the worlds of photography, science and the visual arts. More about Miranda Harcourt.

“In this case, I brought her on to help the extras be really believable and ingrained in their performances, which is something that film-making often ignores. There is a traditional system that treats them as sheep and means they aren’t properly directed and engaged and I just felt I didn’t want to do that in this film. The extras are very important and the world I was creating was very important to me, so I wanted Miranda to enrich that world by workshopping them and getting them into that space. Also, she’s just a great mate and we sometimes have long conversations about the film and throw ideas around. Miranda’s a great intellectual co-pilot in that way and just a very special person.”– Garth Davis (Director: ‘Lion’, ‘Maria Magdalene’)