Teaching both in LA and NYC, Ron Burrus spent many years studying the teaching alongside Stella Adler and is known to be the greatest living exponent of her work. Her techniques have been studied by actors such as Robert De Niro, Martin Sheen, Roy Scheider, Vincent D’Onofrio, Mark Ruffalo, Warren Beatty, Salma Hayek, Michael Imperioli, Christoph Waltz, Benicio del Toro and Marlon Brando.
Working with film scripts, the actor will first audition for the role and then prepare a scene with a partner from the material provided. All work by the actor is filmed and from the viewing of the tape, adjustments are made either to be brought back or done on the spot. Advanced actors who have their own way of preparing material are best suited for this workshop.
“When the camera moves in close, it´s all about what´s moving inside you before you speak. It´s vital for the actor to not just hear and memorize technique, but evolve his own process. To learn more than just what it takes to get a part – to have a technique that will serve him for the rest of his life. – “The key is to get an actor to slow down inside.” – Ron Burrus / Acting Teachers of America – A Vital Tradition

Material covered include: ■ Actors providing what words cannot do ■ Proving truthfulness to self ■ Unspoken language of film acting ■ Theme and POV ■ Sequence-growth-climax ■ Actions first – words second ■ Emotional timelines ■ Attitudes and Partners ■ Three levels of justification ■ Being Specific ■ Being present under pressure ■ Three types of reactions ■ Putting feelings in their rightful place ■ Behavior/activity combined with dialog ■ Playing actions rather than words ■ Creating past to influence present ■ Imagination as a major tool for preparation

“A session with Ron is like going to church. I am not a bit religious but I can image that the feelings of calmness and reassurance I am left with after an hour with Ron is similar to sensation of walking about of a service. This is high praise! But I don’t believe there anyone better at breaking down a script. He just makes things so much simpler and that is all I ever need.” – Jane Levy ( “Shameless” – Tv-Series )
“Ron is not just an acting teacher. He understands the human condition and helps you understand it and put it into action in your acting…” – Schauspieler Sebastian Eslava / “Narcos – Netflix”
Dates: * Postponed to May 2022 or January 2023 in Berlin
Camera Acting Intensive: 5 Days | Mon thru Fri | 10:00 am – 5:00 pm
Fee: 725 Euro VAT incl. (limited to 14 participants)
Early Registration Fee: 685 Euro VAT incl.
Observers (Directors, Script Writers, Actors): 5 days 205 Euro, 3 days 140 Euro or 2 days 95 Euro
Observers limited to 14 participants
Grands: Bildungsprämie & GVL | (Level: Intermediate & Advanced actors)
Organisation: Matthias Schott | More about the Stella Adler Technique
For further information & application, please send us an Email: info@schott-acting-studio.de

Please book only after being accepted to participate 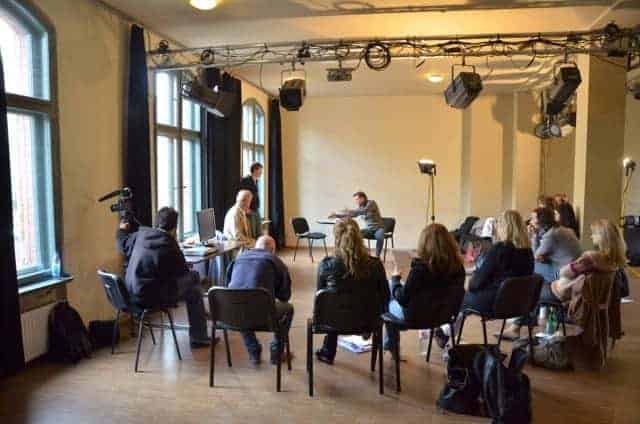 “From his rich experience and his exceptional personality, Ron Burrus has taught us many things about acting but also about how to live as an actor or simply as a human being. Ron showed us how we could improve our acting skills through a daily life work and a different way of living. His training was very concrete and led us on every steps of our work ; from how to work on a character and on a script, to how to understand and act a scene.
If you participate in this workshop, you will need a sharp pen and a thick notebook because you won’t want to miss any of his tips !” – Nagisa Morimoto

“Ron is one of the best acting teachers I have ever worked with. I was amazed and thrilled by how much I came away with in such a short period of time. I have a whole new understanding of character development and script breakdown, it was a revelation for me and I easily filled a notebook with notes worth their weight in gold. His energy, enthusiasm, playfulness and support are inspiring and I cannot wait for the next opportunity to work with him.“ – Leanne Rivers