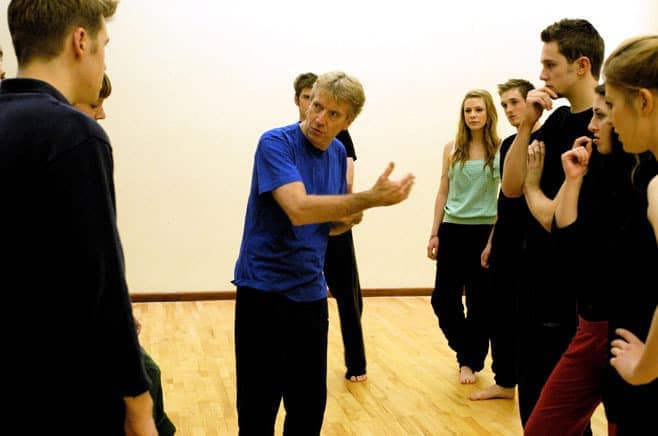 He was a theatre critic and arts journalist for The Guardian and The Times for over 15 years, has travelled to India, Japan, China and Bali exploring and researching different acting techniques and is the author of The Outstanding Actor: Seven Keys to Success. It’s fair to say he knows a thing or two about acting.

Next week, Rea brings his expertise to Soho House Berlin. In his workshop, What Makes an Actor Outstanding, he’ll demonstrate various techniques on three actors and explain why British actors are some of the most highly regarded in the world.

“The ‘British Technique,’ as it is known, focuses on language and the clarity of getting the story across in an accurate and speciﬁc way,” says Rea. “Many British actors get work in Hollywood playing American characters,” he adds. “It doesn’t happen as much the other way around because most American actors won’t have the technique to survive on stage. British actors, mostly, are trained between stage and screen and can move between the two.”

In the run-up to the event, Rea shares his top acting tips

“There are so many actors chasing so few jobs that if you don’t stand out, you’ll get lost. Find out the qualities that make you special and different. The ﬁrst of my students at Guildhall to have worldwide fame was Ewan McGregor and, frankly, I wasn’t expecting it. He was a very good actor but not necessarily the best in his class. But he had a personality and a quality that made agents want to work with him.”

Bond with your group

“There’s something fascinating about the chemistry of groups. Some students sink without a trace, but generally if one person does exceptionally well they’re not alone. Orlando had such great conﬁdence and flair that we knew he was going to do well, but so did many of his classmates. One went on to become an Italian movie star, others set up a successful theatre company. They all had such great chemistry with each other. This becomes what I call a vintage year group.

Ewan, Orlando, Dominic, Damian, Daniel – all brought enthusiasm to every class and rehearsal day after day. Enthusiasm is such an important quality because it’s infectious and spreads through the room. The opposite – lethargy and cynicism – brings everyone’s energy down.”

“In any ﬁeld, the most successful people are ones comfortable with seeing failure as a necessary step towards success. Try something that may not work or be right. This is what helps develop your imagination, which is really the core of what I do. I’ll be demonstrating some of these techniques at Soho House Berlin because it’s a big part of my work. I teach how to create a playful environment where you can tap into your imagination and take risks.”

“You have to be able to cope with rejection and bounce back every time in order to survive. People who don’t have resilience drop out. The director may have something or someone speciﬁc in mind when casting, so don’t take it as a rejection against your talent. Allow yourself a day of mourning and then put it behind you and move on.”

“This is important in auditions. Remember, no matter how nervous you are, the director is more stressed and under more pressure to ﬁnd the perfect match. They are trying to get beyond your nerves to anticipate what you’re really going to be like. The simple answer is be yourself. If you’re too laid back they might think you’re not serious; If you’re too gushing it comes across as false. Bring enthusiasm in an authentic way. Forget about yourself and concentrate entirely on the character you’re playing.”

Next Workshop with Ken Rea in Berlin (June, 2017) more here