Workshop 2: The 10 Elements Of Great Acting

“John Osborne Hughes is a superb teacher, who has developed an innovative training system that has literally changed my life on every level, both as an artist and a person. Not a day goes by that I don’t incorporate these techniques to help me through life and work. Studying with John gave me the knowledge, faith and confidence to launch my solo career, from which I have never looked back. I highly recommend the Spiritual Psychology of Acting, not just to actors, but to anyone who wants to succeed, develop self-awareness and truly experience the joy of living!” – Catherine Russell; (Vocalist with David Bowie, Jackson Browne, Steely Dan – Now enjoying her own successful solo career – recently nominated for a GRAMMY)

John began his training as an Actor on the Hampshire County Specialist Speech and Drama Course, where he was awarded a special commendation for best actor. He then trained for a another three years at The Academy of Live and Recorded Arts in London, and then for a further two years as a Stage Director with teacher Sam Kogan, in Association with The Moscow Institute of Theatre Arts. 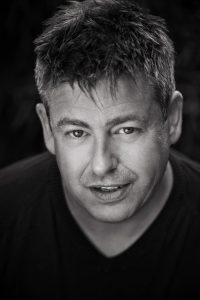 After graduation he worked as an actor and stage director. Productions included the British Premiere of William Mastrosimones, ‘Cat’s Paw‘, ‘Ecstasy‘ by Mike Leigh, which met with critical acclaim; Time Out’s Critic’s Choice and What’s On saying it was “Quite simply the best ensemble acting seen on the West End stage in years“.

Inspired by this, he then developed his own company, Miracle Tree Productions, for which he wrote, directed and performed in the hugely successful, “Beyond Ecstasy”. The show enjoyed sell out runs in both London and Edinburgh, was Time Out’s and The Guardian’s critic’s choice and won the Creative Freedom Award for best theatrical production.

” I was visiting London and saw a production of Mike Leigh’s ‘Ecstasy’, in the West End. I was very impressed by the quality of the actors’ work, and their secret turned out to be their director, John Osborne Hughes. One conversation with him about his process with the actors, and I was convinced that it was something that I needed to explore. I invited John to come to New York to teach a small group of us, and for almost 10 years he continued to teach his truthful and highly inspired system of acting in NYC. John is easily the most effective acting teacher I have ever worked with. I experienced dramatic results from his instruction; and it is interesting to note that within a week of completing his course, I booked my first role in a Television series (“24”). I use John’s technique every time I work and find his ideas to be a continuing source of inspiration.” – Sarah Clarke; (Credits incl. ‘24‘, ‘Twilight‘, ‘Bosch‘)

In response to requests from friends and colleagues, he then launched a training department for Miracle Tree Production and began teaching regular classes and workshops in acting technique and the principles of dramatic art . Grounded by his background in the System of Stanislavski, he began an in-depth study of the laws of Psychology and Human Zoology, and endeavoured to explore their application within the context of the art of acting. The system that evolved was then further enriched by the study of Mythology and Philosophy, in particular the Advaita Vedanta wisdom teaching from the Himalayas, through which he was introduced to the practice of meditation. This proved to be the master key in helping the actor to develop charisma and stage presence and it was at this point that The Spiritual Psychology Of Acting was born.

John has taught extensively in London, New York and Los Angeles. He has trained some of the U.K.s brightest actors who have gone on to work in Hollywood, International feature films, T.V., Royal Shakespeare Company and Royal National Theatre. John’s approach to acting is considered by many to be the cutting edge of actor training available in the world today.

“Quite simply, studying with John Osborne Hughes has profoundly improved my acting and quality of life. Prior to meeting John I had worked professionally for a number of years and studied with many “famous” acting teachers, both in the U.S and England. Yet I always felt plagued by a sense of inadequacy in my work, and a constant feeling of inconsistency. Although I had experienced moments of freedom and spontaneity on stage, I still felt confused and lost as to how to produce it consistently. At auditions I often became overwhelmed with fear and self-doubt. And though I dreamed of making a living as an actor, in truth, I did not see it as attainable, as I was so bedraggled by my inferiority complexes, and subsequent fears. All of that has completely changed. Working with John has hugely altered my acting and my life. Ultimately, the result speaks more effectively than words I can write. If you are serious about acting, then this course is not to be missed.”– Richard Brake; (‘Batman Begins’, ‘Cold Mountain’, ‘Hannibal Rising’, ‘Game Of Thrones’)