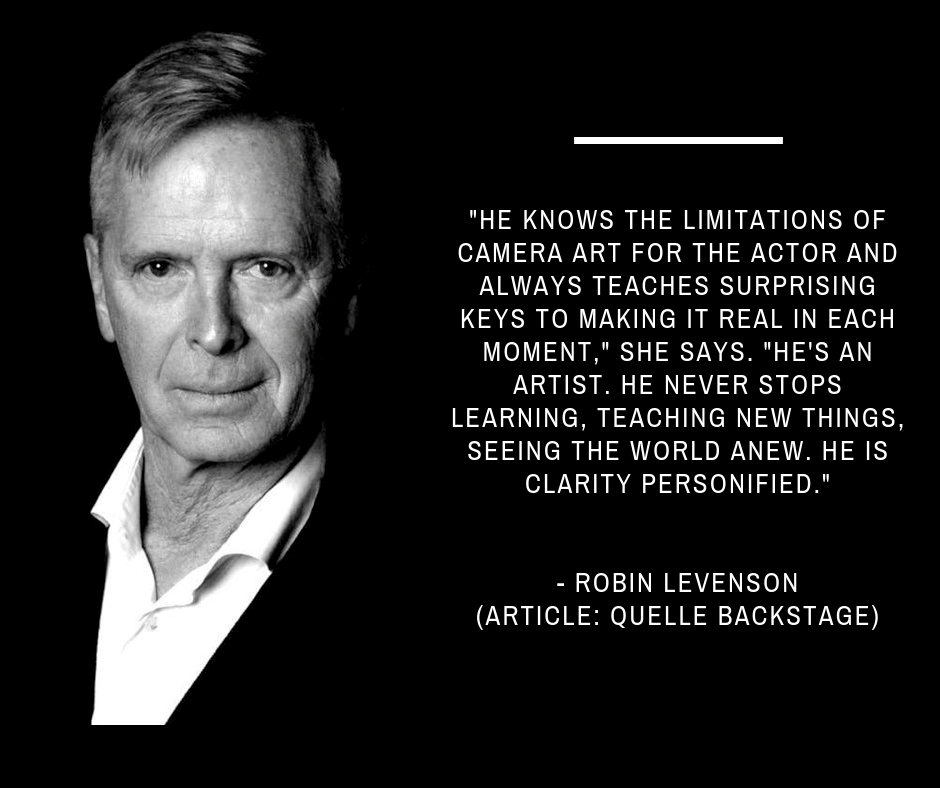 CAMERA ACTING: Only experienced actors as they will be working with writers’ material (selected film scripts). The advanced actor has to already have their own way of working and preparing for auditions. I will give them my approach in the workshop but they should have something to compare it to.

“A session with Ron is like going to church.  I am not a bit religious but I can image that the feelings of calmness and reassurance I am left with after an hour with Ron is similar to sensation of walking about of a service.  This is high praise! But I don’t believe there anyone better at breaking down a script.  He just makes things so much simpler and that is all I ever need.” – Jane Levy / „Shameless“, „Twin Peaks“

„He knows the limitations of camera art for the actor and always teaches surprising keys to making it real in each moment,“ she says. „He’s an artist. He never stops learning, teaching new things, seeing the world anew. He is clarity personified.“ – Robin Levenson / Article: Quelle Backstage

“Ron is not just an acting teacher. He understands the human condition and helps you understand it and put it into action in your acting…” – Sebastian Eslava / „Narcos – Netflix“

“Craft allows you for the potential to have a long career. Ron Burrus lays the foundation for what that craft will be. That is the truth” – Arjun Gupta / „Nurse Jackie“, „The Magicians“, „How To Get Away With Murder“

Mr. Burrus apprenticed under Stella Adler for the teaching of technique and then taught alongside her for 10 years before opening his own Ron Burrus Studio in Los Angeles. Twenty-five years later Mr. Burrus rejoined the staff in New York and merged his studio with the Stella Adler Studios, NYC for the creation of the Art of Acting Studio, Los Angeles.  Internationally, workshops have been conducted since 1995. The film school in Lausanne, Switzerland first invited Mr. Burrus to conduct workshops for their directors and actors. This has lead overtime to workshops done in Mexico City, Mexico; Bogata, Colombia; Hamburg, Germany; Cecina, Italy; Tokyo and Osaka, Japan; Mumbai, India, Manila, Philippines and Toulouse, France. His teaching schedule in the US is divided between Los Angeles (winter,spring,summer) and New York (fall).  Spending most of his teaching time in Los Angeles has resulted in Mr. Burrus adjusting the realistic acting technique (Marlon Brando being the foremost student) for film and the articulation of its doable principles for the 21st century. 2017 will mark the beginning of his 44 year of teaching.